Okay so how do we get rid of this bad juju? I have my Navajo ghost beads, I should be set! (But really, thank you for my beads, Kimmae!) Despite all of the amazing experiences we’ve had so far, things have gotten just a bit sour recently and we’re doing our best to not allow a few obstacles harsh our mellow. We were finally able to get our package with Austin’s replacement tire last Friday. A fellow camper at the Buckhorn Campground, Eddy, checked in on us regularly after we told him what was going on the first day we got to there. FedEx lost our first package within 5 hours of having it. We chose to cancel it and order another from a different place, Bike Tires Direct up in Portland, and they overnighted one via UPS. The office is separate from the campground and apparently the attendant went home early on Friday. So, when UPS attempted to deliver the package, there was no one there to sign for it. So we were thinking we were going to be screwed again until Monday, and were of course throwing a fit and panicking. Not to mention, we had absolutely no service, we were in town with about 100 people, and though we had wifi, the connection was unreliable. But *Eddy* took mercy on us and drove us 50 miles (round trip) to the UPS back in Hazard where we had the package held for pick-up. He helped us out of the kindness of his heart and didn’t accept our offer to give him gas money for doing us the favor.

The incident made us lose about 3 days of riding which sucked, but we are so grateful for Eddy and the other campers that were similarly concerned for us. Perfectly good strangers looking out for one another–what a concept. The moment Austin replaced the tire we were so ready to go. Despite a really late start, we chose to bike the 70 miles to Berea–our longest ride so far and my longest ever. We felt so great getting back on the road. We made it to the Berea Fire Station where we could camp and met a father-daughter cycling duo from the UK, Will and Rachel. Will has toured several times before and is now retired, and Rachel recently graduated so it was a perfect opportunity for them to tour together, which of course I thought was wonderful. Berea was a cool town with about 11,000 people. We had some ice cream at a local ‘shoppe’ and had dinner. We biked right by Berea College which has some interesting history. It’s a work college and it’s *tuition free.* The college accepts students predominantly from Appalachia from low socioeconomic backgrounds and all students participate in the college’s labor program. Despite some of its rancid racial history, it’s the first co-ed and interracial college in the South. We were happy to learn about the relatively unique history of the institution. 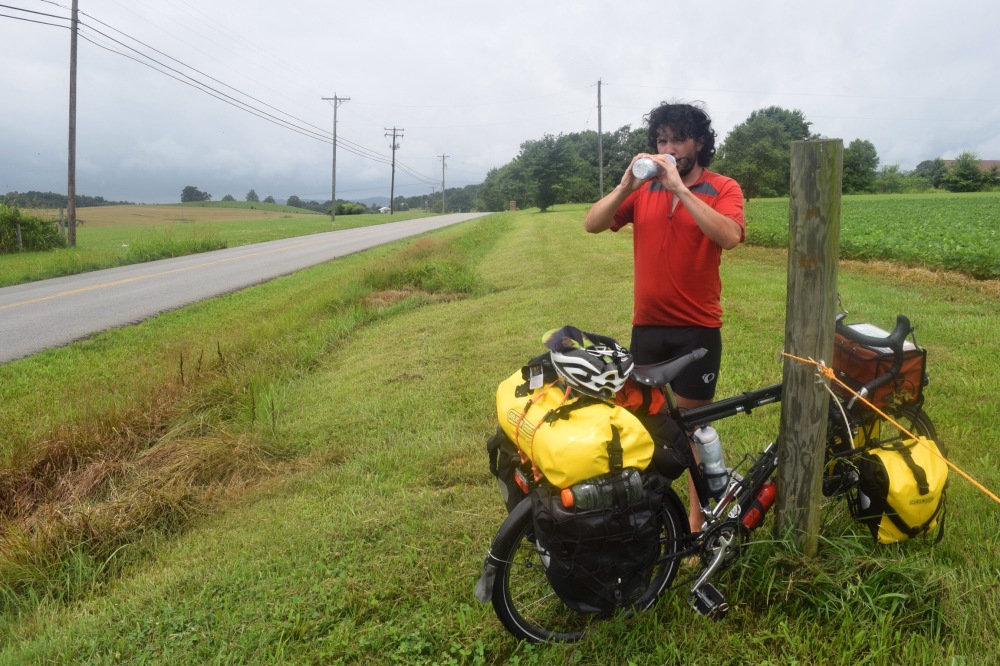 After Berea, we biked 50 miles to Harrodsburg and then 30 to Springfield the next day. We stayed at a community park both days that allowed cyclists to camp. Nostalgia hit me in these parks because of the little league baseball players. It reminded me of the many years my family spent traveling with my brother for baseball tournaments, and how fun those years were. In Springfield we met two more cyclists, Sarah and Richard. We were intrigued by their trip that seemed less structured than the average cyclotourists we meet. They are Anabaptists hoping to make it to Montana and then traveling to Peru to do some mission work. They were carrying a ton, including a cast iron skillet, so they were happy maxing out at about 30 miles or so. They often hitched and just wanted to take it easy and enjoy their journey. They were extremely generous to us and made us whole grain pancakes for breakfast. It was cool to meet folks on a nontraditional tour and learn a bit about their faith.

The next morning, we left with the intention of making it to White Mills, what would’ve been about a 67 mile ride. On our way there, we met two cyclists heading eastbound, John and Paul. They grew up together in Ohio but Paul lives in Phoenix and John lives in Milwaukee now. They met in San Francisco to start their tour and were only on day 40! We noticed Paul was carrying Pedialyte (Austin had to drink some when he felt dehydrated) and he told us that at one point he needed an IV because he also had issues with dehydration. So now he picks up a bottle every chance he gets. They told us how much they hated Nevada because it was so hot and they ran out of water because the stretches between towns were so long. They were the first ones we met that had great things to say about Kansas, though! Of course they felt blessed by how flat it was and as they neared Missouri, they actually found some tree shade. The Ozarks, however, they were happy to have left behind. If two guys averaging 100 mile days with less weight weren’t happy about the Ozarks, what does that tell us about how Austin and I will fare? 🙃 We made it to Howardstown and took a break. There, Austin started feeling debilitated and fatigued and we decided not to continue riding. There was a Catholic Church nearby and we asked to sleep under their pavilion. Luckily there was a large fan but Austin still woke up drenched in sweat. When we checked his temperature, it was at 103! I was so grateful that he noticed his symptoms early and that we didn’t push ourselves to White Mills. The next morning we biked about 10 miles and tried to figure out where to go to find some medical attention. Elizabethtown was the nearest town with an ER and urgent care so there we went.

Elizabethtown is unfortunately 19 miles off route. We preferred to come here instead of heading to White Mills in hope of hitching a ride from the volunteer fire department. We got here Wednesday and Austin got checked out at the urgent care. They ran some tests, including a test for mono, and referred him to the ER for a hepatitis screening. The ER is the fifth busiest in the state, so we were advised to go at 2 AM when it’s least busy. We ended up going at 4 AM and Austin didn’t get called until 6:30 despite the few people in the waiting room. They ran similar tests and also an ultrasound to check for gallstones or blockage of any form. Ultimately, things turned out fine. The physician didn’t seem too concerned with Austin continuing the tour and just suggested that he had a hepatitis screening once we finished and got back to Denver. We’ve taken some days off to rest and see how his medication affects him. He’s been well and feeling fine for the most part but we were advised to rest until he spent a full 24 hours without any symptoms. It looks like we will be able to leave tomorrow, Sunday.

The last ten days or so have been unnerving and sort of discouraging. We keep having to revisit logistics and we’ve been pretty scared about running into issues that may force us to discontinue the tour. I don’t want to even consider that possibility, but I suppose we have to be open to it. As of right now, we anticipate taking a bit more than 3 months but we are absolutely determined to finish and I’m confident that we will. We just have to keep jumping over the hurdles as they arrive. We knew this trip wouldn’t be without its challenges–and that’s the beauty of it. I suppose this is a great metaphor for how our lives work. You’re met with obstacles but you keep pushing through them, and that’s how you develop grit. In the face of hardship, we’re trying to stay firm and remind ourselves of the bigger picture. When we dip our toes in the Pacific, these setbacks won’t seem quite as significant. Our aim now is to make up some of these zero days with increased mileage and get to Illinois soon, but we will still be cognizant of how we’re feeling and we’ll be sure not to overextend ourselves. I know ‘The Alchemist’ is fluffy and all but a part of me does feel the world is conspiring to help Austin and I achieve what we want. We have received so much support along the way that we simply could not have foreseen. I’m grateful that we’ve had the resources to deal with the issues that have risen and we know there’ll be more stumbling blocks where these came from. I suppose it’s how we deal with them that will ultimately reveal our character and eventually, the challenge becomes a muse for introspection. But for right now, we’re nearing the 1000 mile mark and I’m so ready to keep pedaling!